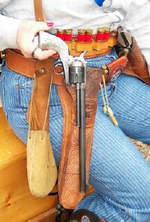 The Oakwood Outlaws club is a SASS-affiliated cowboy action shooting club located in Oakwood, Texas.  We were founded in August 2001 by Justa Hand and TX Alline.   We are dedicated to reliving the history of the American West through cowboy action shooting.  The club is designed to provide a safe and friendly environment for cowboy shooting enthusiasts.  Strict shooting rules are enforced.

We have 14 STAGES and shoot rain or shine.  Many of our stages are covered, so we can shoot when the weather is not perfect.   The Oakwood Outlaws also have air conditioned/heated flusher restrooms!  Come out and join us for some old-fashioned fun cowboy action shooting on one of the best shooting ranges in the Southwest.


What is Cowboy Shooting?  Cowboy action shooting is the fastest growing shooting sport.  Shooters dress in 1800-period duds and compete in scenarios.  The scenarios are western-based scenes that require the shooters to role-play an old west character in a movie-type setting called a "stage".  Some of the Outlaw stages are:  a general store facade, a cowboy campsite, a log cabin, and a blacksmith shop.  The shooter is required to act out the scenario while engaging various targets with 1800-period firearms.
We shoot six main stages.   Whether you are a beginner or an experienced shooter or you just want to find out more, come join us at a monthly shoot.  Our Range Marshal can show you the ropes of cowboy and cowgirl shooting.

​The Oakwood Outlaws club is a SASS-affiliated club.  SASS stands for Single Action Shooting Society.  SASS is our governing body that makes the rules that we use for our matches.  The SASS Shooter's Handbook is a good place to start with all of the details.


Tools of the Trade:  Shooters use originals or reproductions of firearms manufactured during the 1800's.  A match requires two pistols, a rifle or carbine, and a shotgun.  Ammunition must be light-loads with lead bullets or shot.

Shooting Classes & Awards:  The Outlaws present award ribbons to the first three finishers after every match.  We shoot all SASS classes which as defined in the SASS Shooter's Handbook.
Camping: We have primitive camp sites available. Camper trailers are welcome; however, we do not have hook-ups yet.    Some trailer sites now have access to electricity for a modest fee.  Reservations are required for the electrical hookups.  Contact TX Alline at 903/545-2252 or txalline@yahoo.com for availability and pricing.  We have extra wide gates and a wide road to accommodate your trailer.  There is no charge to pop a tent or park a trailer without hook-ups.  Hotels  are available in our area.  Most hotels are within 15 - 30 minutes of the range.

Food:  Restaurants are available in Buffalo or Palestine, Texas, about 20min from the Club.   Several wood-burning grills are available on the Oakwood Outlaws campus for cookouts.   During the summer, we serve root beer floats after the shoot... FREE!